One member of the Holy Swiss Trinity is back from the dead. No, it can’t be the Father, as the mighty Knut is alive and well. And no, it can’t be the Holy Spirit, as Nostromo is dead and buried for good. No, the only one who had a chance to come back was the Son, and so he is arriving, resurrected directly from the kingdom of Lucifer; UNFOLD is his sacred name.

Formed back in 1995, the band spent some years building its proper style in a mix of incredible metal heaviness and massive hardcore slowness, this all twisted by a deep sense of how melodies are supposed to sounds in hell. They soon became a European reference in the field of tortured and emotional hardcore (later known and popularized under the label ‘post-hardcore’). They were better, louder and crazier than a whole bunch of bands, back then. But sadly enough, after two gigantic albums, Pure (2000) followed by Aeon/Aony (2003) and a lot of destructive live performances, the band decided to close the chapter in 2004. Too bad. The mourning was hard, as no one would ever take their place in our hearts.

But forget it all now, the mourning is over, as the Holy Son walks among us again! And He is not just back, he brings with him a brand new album to be released in cd/lp this fall.
Skull crushing avant-garde metal, oppressive but distinctive, heavy but smart. The new songs might cut your head off. Without notice.

Stay tuned and celebrate the return of the godfathers of heaviness. Hail Satan. 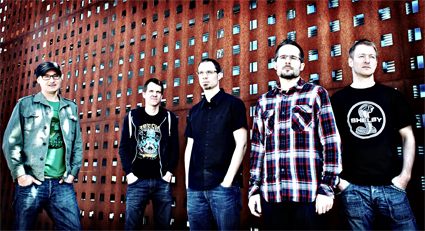