Today is the day as the gorgeous new 7" single from CHARLES IN THE KITCHEN is now available worldwide. 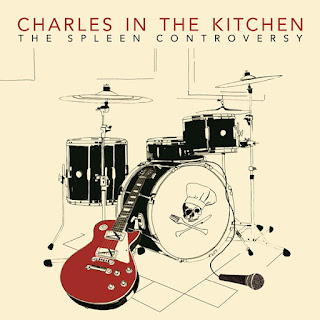 Besides, tonight we're throwing a party in order to celebrate this awesome single, come play madness!! 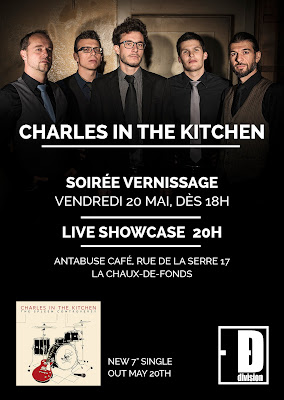 Now let's here what the band has to say about this new release:


“We were finishing writing the songs (nfr: for their second album) last fall and were discussing the release options with the guys at Division. It was too short for an album release before the summer. Someone then said, “Why not release just 1 or 2 songs first?” Someone else added “On a 7” single!” Old school as fuck, but fresh.” The first song of the 7”, and single “The Spleen Controversy” is a track that the band considers to be “the most danceable song of the album”, with a contagious groove and rhythm that are rightly complemented with vocals that jump up and down, the unceasing energetic vibe and the dramatic weight that parades from time to time, the two spectacularly intertwined. “A sort of 70s dancy-soul-rock song whose line was inspired by let’s call it “the approximate memory of a video game jingle of the 80s”. Not kidding! The bass line, on which the whole song is built, was even composed on a gipsy guitar,” explains the band.

For the second side of the 7” they wanted, “something special, something we would never do otherwise, something we might never do again.” Remember 1993 electronica-clubby-pop hit “Sweet Harmony” by UK’s The Beloved? Yeah… they did something special alright. There’s no relation between the song and Charles In The Kitchen, but they wanted something different and special. For reasons they try to ignore, the idea came from the singer that had been dreaming singing the song. The only rule was “it had to be rock and therefore be recorded using only our instruments”.  The song has also a special participation of Lisa-Marie Boux, responsible for all the sweetness that enables an unhealthy addiction.