For now some years, one of our main concern has been to develop our roster by including more diversity in the bands that we chose to collaborate with. We've been going in a more heavy rock/grunge way with THEM STONES, in a truly rock universe with CHARLES IN THE KITCHEN and the power-pop/turbo-punk of PAPERTANK was also something new for us.

Now the time has come to push things further with a brand new adjonction to our catalogue. This band has immediately reached our hearts as well as enchanted our ears. Their unique blend of trip-hop, dark-folk and drone-pop was so fresh, so captivating that taking them on our label was only too evident.

Ladies & Gentlemen, please welcome dIVA in the ever growing Division family! This Swiss band's first album, named "SOL", will be released on vinyl on November the 24th. A huge release party is already planned in Neuchâtel's Queen Kong Club right on the release date. 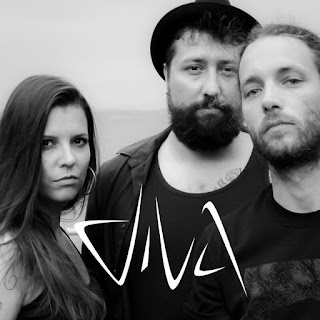 The project dIVA is realized in 2013 when the guitarist Pierre-Emmanuel and the singer Lisa-Marie first meet and discover a common will to express themselves artistically in a formation that can grant total freedom and a true evolutionary vision. In the first months, the whole of the composition takes place in total symbiosis between the two protagonists who choose, as a conceptual framework, the relation of man to space, and more precisely to the planets of the solar system. Each note is weighed, measured and executed hundreds of times before being finally retained. The lyrics develop like metaphors on the ambiguous relations that the human beings have always maintained with the cosmogony.

The style that finally emerges from the alliance of the subtle sounds of Pierre-Emmanuel and the sublime voice of Lisa-Marie surpasses the sum of its parts, so, if one swims sometimes in the turbid waters of an elegiac dream-pop , one often plunges into the abyss of an inspired trip-hop while a certain form of haunted dark-folk is never far away ... One thing remains constant, the quality of the compositions which all deploy like so many definitive weird tales.

However, despite of the osmosis which unites the two musicians, something was still missing so that the formation can really flourish and assume its perfect completeness. The element that was lacking materializes at the end of 2015 by the adjonction of Marc, brilliant sound designer and producer with multiple talents. With such a musician behind the machines, the group can finally consider the recording of its first album in the winter of 2016. With the addition of a 3rd member, the ideas expand so much that the concept album originally envisaged is divided into two distinct parts, which will be released separately at a distance of one year.

So yeah, "SOL" is only the first part of a gigantic conceptual work!! So you can already expect another release for the fall of 2018!

To make you wait until the release of their first album on beautiful black vinyl, here is a teaser of what is to come:

We will unveil a whole song in the coming weeks, so be prepared!