NEIGE MORTE invoking the majestic throne of Satan for Christmas

As you've probably guessed by now, Santa Claus will  be very generous with you this Christmas, as there is not just one, but TWO records to be released on December the 15th...

Yes, alongside with DIRGE new ambient ep, we will also introduce you to our most relentless & extreme band to date, the French black metal nihilists from NEIGE MORTE and their infamous 3rd album TRINNNT. This black vinyl edition will be a collaboration between us, the American label DULLEST RECORDS & our Russian fellows from GRAINS OF SAND. 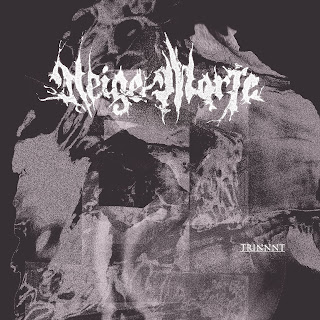 On this third album Neige Morte displays its more punishing songs ever. Filthy, relentless and truly insalubrious, their music is clearly not for every ear. Frontal blastbeats attack, gloomy & abstract parts, inhuman screams, everything is here reunited to give birth to your worst nightmare. The sound is as raw as it gets, the drums are furiously insane, the riffs are the incarnation of despair & depravity. This is black metal at its uttermost punishing level. Let the churches burn, my friends, let the great Horned one come take his throne, let the world sink down to the abyss.

Here is the first track of the album, so you can realize what kind of extremity you'll be dealing with:

If you're not familiar with this French fellows, here is a short biography:

Neige Morte is born in Lyon as the wish to dispense the rawest & dirtiest black metal. After the adjunction of a singer, the band soon records its first untitled album and a split vinyl with The Austrasian Goat. These two first offerings display a destructive simplicity and an archaic sound that go perfectly with the band’s pure hatred. On Neige Morte’s 2nd album, “Bicephaale”, the music reeks even more of graveyard & putrescence, rejecting any idea of compromise.

In 2016, the band loses its singer, hires a bass player and the guitarist takes on the vocal duty. At the end of their latest Russian tour, the trio records “TRINNNT”. This third album explores the same anxieties with a more death metal approach, assuming hypnotic and repetitive ideas that ultimately lead to total annihilation.

Here is their disturbing band's picture:

You can say hello on the band's FACEBOOK.
And listen to their previous releases on their BANDCAMP.

Talk to you soon!!